How to connect to 4shared via WebDAV

Work on WebDAV began back in 1996 in an effort to enable users to work with online content directly. One of the much needed HTTP extensions at the time, WebDAV stands for Web Distributed Authoring and Versioning protocol. Before WebDAV, users could read and view online content, but to be able to change something, the content needed to be written offline and then uploaded, which also took quite some time. 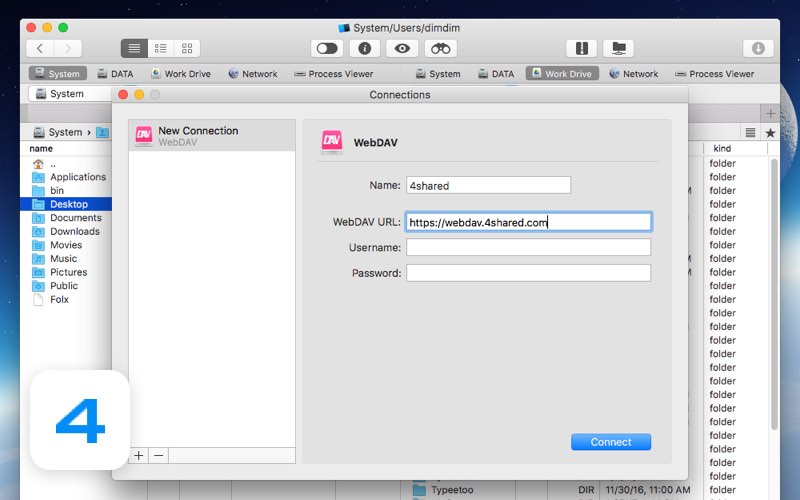 Once you know how to use WebDAV you can easily create new files and folders on a server, delete files, edit existing ones, copy and move content between local and remote folders on the server. A free WebDAV client is probably the best option for working with this extension, and you can see if Finder will do for you. But free apps are almost always limiting you in terms of what you can do, so probably getting a quality Mac WebDAV client for a reasonable price is the way to go. Read on to know more about WebDAV OSX access, the WebDAV client Mac options, which WebDAV tool offers mounting option, etc.

When connecting to 4shared via WebDAV you'll need to use the following attributes:

How to connect to WebDAV with
Commander One

There is enough great WebDAV client Mac apps online to choose from, however we'll concentrate on an app that is primarily a file manager, but does a great job with WebDAV access and offers an appealing interface. Commander One is a dual panel file manager app that offers exquisite file management possibilities thanks to two panels for fast file transfer between Mac disks, mounted online servers and storages; unlimited number of tabs in each panel; interface that is easy to personalize; customizable hotkeys, etc. You can easily use Commander One as a WebDAV client for Mac. This app is also offered in PRO version that holds advanced possibilities, such as mounting a great variety of online servers and cloud accounts on your Mac and working with the files there as if they were stored locally. Additionally to being a WebDAV file manager, it allows working with FTP, Amazon S3, OneDrive, Google Drive, and other services. You can mount as many WebDAV accounts to Mac OS as you need.