The list of top synchronization software for High Sierra in 2018

With the latest release of macOS High Sierra came lots of improvement and multiple new features prompting Mac users to upgrade their older operating system versions. Probably the most notable in this update is the Apple File System (APFS), that can help free up space on your computer, speed up certain tasks, and arrange for easier backup operation.

If you are using synchronization apps for your Mac and other devices it is crucial to be aware whether they are compatible with new macOS High Sierra and its improvements. There are way too many factors to consider when choosing a sync software and the full compatibility with the new OS version is rather important.

To make the choice easier for you and much faster, we have reviewed the most popular and hard working synchronization apps.

This High Sierra synchronization utility is especially known for supporting a wide range of devices that it syncs with Mac very well.

Sync options: there are so many of them to choose from that every client will be satisfied and can customize SyncMate individually. It even syncs media files and folders with personal data. There are also non-sync options that include mounting devices, SMS management, etc.

Note: This is possibly the most sophisticated synchronization app available at the moment thanks to its ability to keep accounts and devices in sync with Mac apps directly without having to sync data through multiple clouds or other apps. 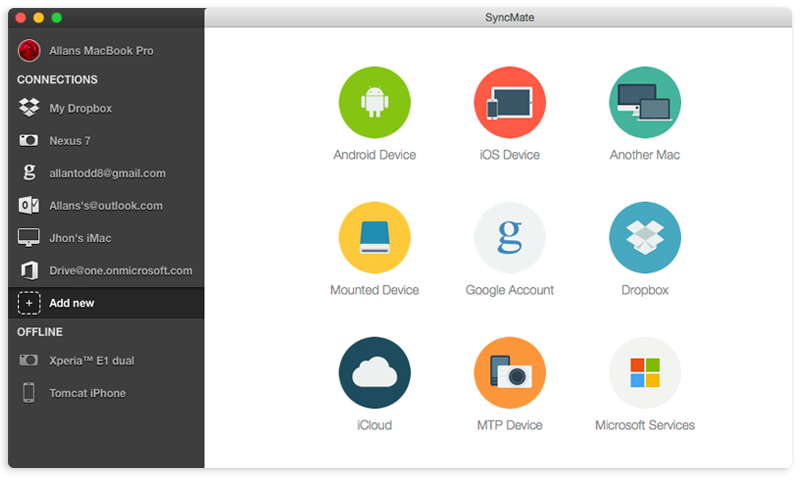 Devices and online accounts supported are specifically Apple devices running iOS. If you need to sync Android devices or others, consider SyncMate or GoodSync apps.

Note: Apple to Apple devices synchronization is performed directly without any clouds or other apps involved. Backup and restoration are great. This app however is suitable for iOS devices and Mac sync and could probably use more sync features.

The name suggests synchronization, whereas in reality this is a backup and restore app.

Supported devices: Synchronize PRO allows you to backup Mac data to a file server, FireWire disk, and PowerBook. It also supports bootable backups to a disk image over a Network. You can schedule backups or make them automatic.

Note: Keeping data in sync with this app is not an option, however this is a great software for backup purposes.

Next on our list of top Mac synchronization solutions is GoodSync that can sync, backup and restore data.

Devices and online accounts supported: computers, mobile devices, FTP, S3, GDocs, SkyDrive, DAV, etc. You can set it up to sync any file on your Mac automatically with other computers, drives, and mobile devices. Data backup on drives and devices can be performed to FTP, S3, SkyDrive, etc.

Sync options: The fact is that GoodSync can only sync folder to folder, not folder to Mac apps like iCal, iTunes or Photos. Folders containing files are synced well among supported devices and accounts.

Note: It would be the greatest software if the sync options list wouldn't be too poor. GoodSync can't synchronize contacts and calendars and is not capable of interacting with native Mac apps, which is rather significant for the quality of sync as well as its security.

Our list of best synchronization software for macOS High Sierra wouldn't be complete without cloud services, even if technically they are not software. Still worth mentioning.

The advantage of using clouds as sync tools is of course an instant access to the data from any device provided it is connected to the Internet. The disadvantage is the lack of direct interaction with Mac apps like iTunes or lack of synchronization of contacts or calendars. Here we are having a look at iCloud, Dropbox, and SugarSync.

iCloud is an Apple product and is the cloud storage platform for all devices made by Apple. This service will store personal data in iCal or Address Book. It is only exclusive to Apple devices though.

Dropbox is a well-known and highly popular cloud storage service that allows sharing stored data with others even if they don't have a Dropbox account. A big advantage is a fair size of free space and the support for multiple OS types, including Mac, iOS, PC, and Android.

SugarSync is somewhat similar to Dropbox in terms of storage space and data transfer. A notable feature is the possibility to remove your synced data from a computer in case it gets stolen. SugarSync supports Windows, Android, and Mac.

Thank you for reading our review and hopefully it will assist you in finding your best macOS synchronization software!