What is FUSE
for macOS?

MacOS comes along with a piece of software called FUSE and many do not seem to be aware of its purpose. So what is FUSE? This software enables extending native file handling capabilities of macOS with the help of file systems developed by third parties. You might have heard of MacFUSE, it is a previous version of FUSE system and is no longer maintained. Legacy MacFUSE file systems are supported through the optional compatibility layer.

Users install FUSE for macOS to utilize a third-party file system written atop FUSE for macOS. Developers download FUSE to use its SDK for writing new files systems in an easier and quicker way as compared to traditional approach of writing in-kernel file systems. Content of these file systems can come from any sources, e.g. the local hard drive, the network or memory. Unlike kernel extensions, FUSE file systems are regular applications that are no different from other macOS apps, when it comes to programming tools, debuggers and libraries you are referring to.

FUSE software offers a mechanism for implementing a full-scale file system in a user-space program. APIs provided by OSX FUSE include a superset of the FUSE API. Since it initially has come on Linux, many existing FUSE filesystem can be reused on macOS.

FUSE SDK are C-based and Objective-C-based, in case you need a file system created in Python, Java or any other language you will have to install the relevant language bindings first.

The FUSE consists of a kernel extension and various user space libraries and tools, and the repository contains source code for file systems such as sshfs, procfs, AccessibilityFS, GrabFS, LoopbackFS, SpotlightFS and YouTubeFS. 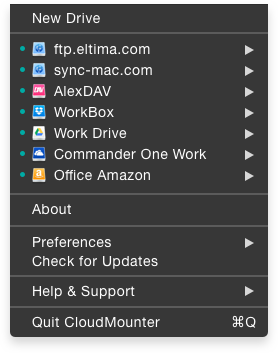 CloudMounter, a popular application by Eltima used for mounting cloud storage services on Mac, also relies on FUSE. The software allows mounting cloud storages on Mac, so you can browse their contents as if it were stored on a local hard drive, and it also enables working with remote servers via FTP/SFTP/FTPS and WebDAV protocols. Cloud services supported include Google Drive, Amazon S3, Microsoft OneDrive and Dropbox.