How to connect to Yandex via WebDAV

WebDAV began in 1996 and stands for a Web Distributed Authoring and Versioning protocol. It was a much needed step in the development of the Web, because just reading and viewing of content wasn't enough anymore. Content was written offline and then uploaded, but it wasn't the same as you can do it in Google Drive or Office 365 these days. That's why a bunch of extension for HTTP was developed including WebDAV.

Once you established a WebDAV connection you will be able to create a new file or folder on a server, delete file, edit an existing file, copy or move files between a local folder and a remote folder on the server. 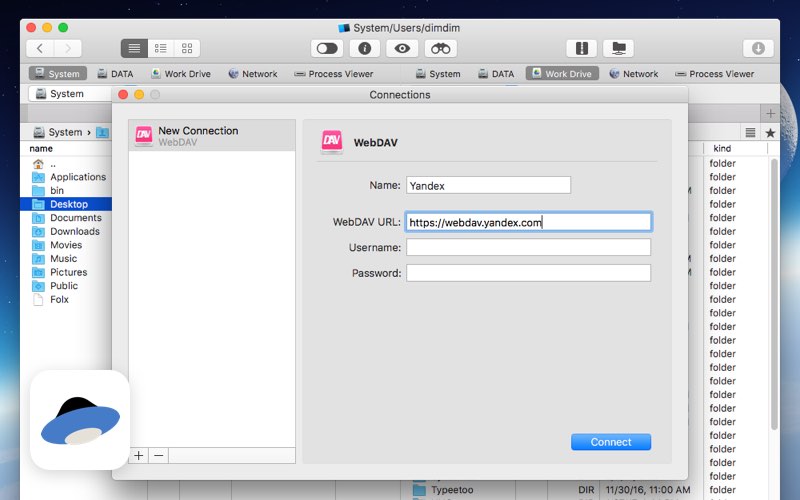 Even though WebDAV protocol is pretty straightforward, sometimes it would be nice to have a WebDAV tutorial of some sort, because using WebDAV correctly will make your work more efficient and fast. In this article we'll discuss WebDAV access on Mac OS, choosing the WebDAV client Mac users will love, whether you have WebDAV mount options, and which app will suit your needs when you are connecting to Yandex.Disk via WebDAV.

When connecting to Yandex.Disk via WebDAV you'll need the following settings:

There is a selection of great WebDAV software available online, but here we'll concentrate on Commander One – a friendly and very visual dual panel free file manager that can also serve as a WebDAV client for Mac. Commander One is an ultimate solution for someone working with a large amount of files daily or someone who is simply looking for easier file and folder management. This highly customizable app allows a high level of personalization with colors and fonts to match your work style, allows as many tabs with open folders as you may need, hotkeys, easy work with ZIP archives, etc. PRO Pack of Commander One offers extended possibilities, including mounting of various online servers and cloud accounts as Mac disks and working with them as if they were local ones. You can mount WebDAV as well as FTP, Amazon S3, OneDrive, Google Drive, and more, and manage your files at an impressive speed. Add as many WebDAV accounts to Mac OS as you need in Commander One.