The RS232C DE-9, often mistakenly referred to as a DB-9 port used to be the industry standard for serial data transmission. A RS-232 serial port was a standard feature of personal computers as it was the preferred way to connect modems, keyboards, mice, external storage and many other peripheral devices. 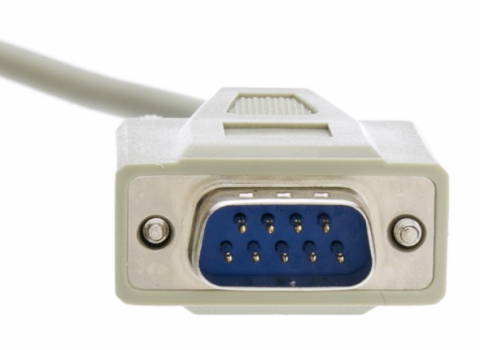 The background of the 9 pin serial port

First introduced in the 60s, RS-232 is a protocol that defines how the data is transferred, bit by bit from a Data Terminal Equipment (DTE) such as a computer terminal, to Data Communication Equipment (DCE) such as a modem.

RS-232 is the common standard used in serial ports. It defines the electrical properties and the timing of signals, as well as the interpretation of signals, and the physical size and pinout configuration of a connector.

It is however possible to use an external USB-to-RS-232 converter or an internal expansion card with one or more serial ports to connect a RS-233 serial peripheral device to your computer. Many motherboards also feature a COM port header which makes it possible to install a bracket with a DE-9 port. 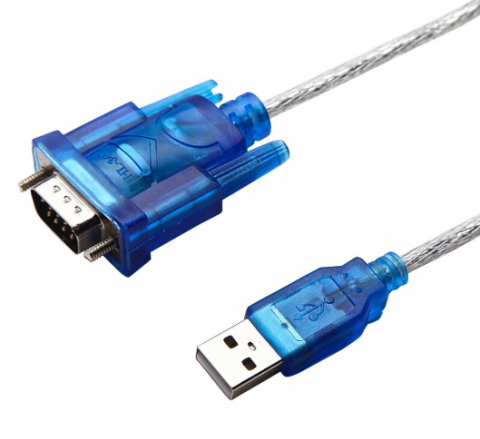 Despite the shortcomings and the technology advancements, RS-232 interfaces are still very much in use with large industrial machines, networking equipment and scientific instruments where point to point, low speed wired data connections is sufficient.

RS232 allows for full-duplex communication – this means that both devices can interface with each other simultaneously. A common ground between the computer and the connected serial device is mandatory. This is represented by voltage levels defined by the RS232 protocol.

With RS232, hot-plugging or hot-swapping is not supported, though it is sometimes possible to plug in a serial device and it will work while the computer is running. With current technology, only a 9-pin connector is in use with most personal computers.


A RS232 transmission begins with a start bit. A start bit notifies the receiving computer of the incoming transmission. The data packets consist of 7 or 8 bit words. The start bit is generally a low voltage bit, between +3v and +15v. The data bits then follow the start bit on a LSB basis ( least significant bit ) - this is the bit with the lowest numerical value. A parity bit would generally follow the data, and then the transmission is ended with a stop bit. 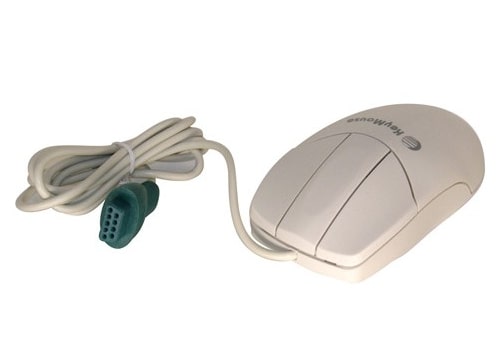 A serial mouse comprises sensors, mouse controller, communication link, data interface, driver and software. Movement of the mouse as well as button clicks is detected by the sensors. The mouse controller takes note of the current mouse position as well as the state of the various sensors.

When this information changes, a data packet is transmitted by the mouse controller to the computer’s serial data interface controller. It is the mouse driver that is installed on the computer that receives the data packet and decodes it, then executing the appropriate action based on the instructions received.

A standard mouse expects a RS-232C output signal with an approximate 12V level as its input signal. The RS-232C port will have a number of output lines from which the mouse can take current (about 10mA). The mouse then sends data to the computer’s receiver chip. The data being sent must be at a level that can be understood by the receiver chip. Average mouse outputs range between +5V, -.5V and +12V. On average, a mouse will use about +5 volts to perform.

A serial mouse makes use of DTR (Data Terminal Ready) and RTS (Request to send) lines to generate approximately 5V of power for its microcontroller circuit. An optomechanical mouse (one that makes use of optical sensors) that has LEDs will require power to light those LEDs.

Diodes are often used to take current from the DTR and RTS lines – intercepting the diodes and resistor. Negative supply for the transmitter is taken from the TD pin. The TD pin is the pin that carries the data from the DTE to the DCE.

When DTR link is toggled, the mouse should identify itself by sending one data byte containing the letter M ( ASCII 77). For the mouse to work correctly, both RTS and DTR lines must be positive.

Ensure the DTR-DSR and RTS-CTS lines are not shorted. To implement the RTS toggle, set the RTS line to negative and then positive again. The negative pulse width is at least 100ms.

This is a cold boot, after which the RTS line will be set to negative. Setting the RTS line to a positive level is considered a RTS toggle. Here is the layout and function of the 9 pins: 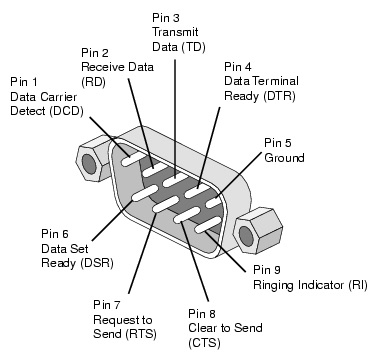 A data packet consists of 3 bytes. Every time the mouse state changes, the mouse sends that packet to the computer.

The bite marked with 1 is sent first, (lowest numerical value) then the others follow. Should the data transmission go out of sync, the bit D6 is the first byte for synchronizing the software to mouse packets.

LB represents the left mouse button where 1 denotes that it is pressed down.

RB is the right button.

JustStream Stream or mirror from your Mac

SyncMate Sync all your devices with Mac

Typeeto Mac as a bluetooth keyboard Explore All Solutions

Port Virtualization Technology Add our redirection technology to your project

About Electroniс Team Our story

Contacts We are here to help

Blog Get the latest news and updates on our solutions
Electronic Team, Inc.
Contact Sales